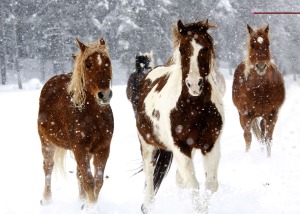 “God made the horse from the breath of the wind, the beauty of the earth, and the soul of an angel.”

A brother and sister made their usual hurried, obligatory pre-Christmas visit to the little farm where dwelt their aging parents with their small herd of horses. The farm was where they had grown up and had been named Lone Pine Farm because of a huge pine, which topped the hill behind the farm. 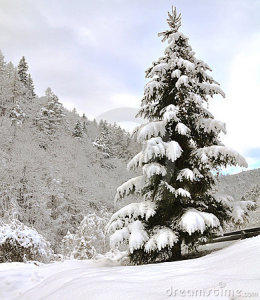 Through the years the tree had become a talisman to the old man and his wife, and a landmark in the countryside. The children had fond memories of their childhood here, but the city’s hustle and bustle added more excitement to their lives, and they had moved on to a different life.  The old folks no longer showed their horses, for the years had taken their toll, and getting out to the barn on those frosty mornings was getting harder ~ but it gave them a reason to get up in the mornings and a reason to live.  They sold a few foals each year, and the horses were their reason for joy in the morning and contentment at day’s end.

Frustrated, as they prepared to leave, the children confronted the old folks: “Why do you not at least dispose of  ‘The Old One?’  She is no longer of use to you. It’s been years since you’ve had foals from her. You should cut corners and save, so you can have more for yourselves. How can this worn out old horse bring you anything but expense and work? Why do you keep her, anyway?”

The old man looked down at his worn boots, holes in the toes, scuffed at the barn floor and replied, “Yes, I could use a pair of new boots.” His arm slid defensively about the Old One’s neck as he drew her near with gentle caressing, rubbing her softly behind her ears. “We keep her because of love. Nothing else, just love.”

Frustrated and irritated, the young folks wished their parents a Merry Christmas and headed back toward the city as darkness stole through the valley.  The old couple shook their heads in sorrow ~ it had not been a happy visit. A tear fell upon their cheeks. How could the young folks not understand the love that filled their hearts?

And so it was, that because of the unhappy leave-taking, no one noticed the insulation smoldering on the frayed wires in the old barn. None saw the first spark fall. None but the “Old One.” In a matter of minutes, the whole barn was ablaze and the hungry flames were licking at the loft full of hay. With a cry of horror and despair, the old man shouted to his wife to call for help as he raced to the barn, trying to save the beloved horses. But the flames were roaring now, and the blazing heat drove him back. He sank sobbing to the ground, helpless before the fire. His wife cradled him in her arms, and they wept bitterly at their loss. 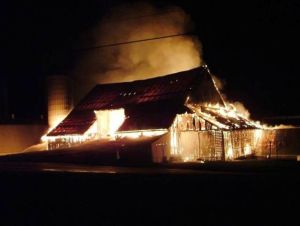 By the time the fire department arrived, only smoking, glowing ruins were left, and the old man and his wife, exhausted from their grief, huddled together before the barn. They were speechless as they rose from the cold snow-covered ground. They nodded thanks to the firemen ~ as there was nothing anyone could do now.

The old man turned to his wife, resting her white head upon his shoulders as his shaking old hands dried her tears with a frayed bandana. Brokenly he whispered, “We have lost much, but God has spared our home on this Christmas eve. Let’s gather strength and climb the hill to the old pine where we have sought solace in times of despair. We will pray there and thank God for our home and for those precious gifts that He blessed us with for so many years.”

And so they slowly climbed up the hill, brushing aside fresh tears with withered hands.

The journey up the hill was hard for their old bodies in the steep snow. As they stepped over the little knoll at the crest of the hill, they paused to rest and suddenly gasped and fell to their knees in amazement! Seemingly, every glorious brilliant star in the heavens was caught up in the glittering, snow frosted branches of their beloved pine. And poised on its topmost bough, a crystal crescent moon glistened like spun glass. Never had a mere mortal created a Christmas tree such as this! 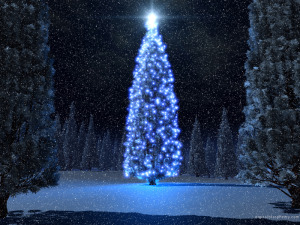 Suddenly, the old man gave a cry of wonder and joy. Amazed and mystified, he took his wife by the hand and pulled her  forward. There, beneath the tree, in resplendent glory, was their Christmas gift! Misty shadows glistening in the night light…

Bedded down all around the “Old One” close to the trunk of the tree, was their entire herd, safe and sound!

At the first hint of smoke, she had pushed the door ajar with her muzzle and had led the others out. Slowly and with great dignity, never looking back, she had led them up the hill. The foals and yearlings were frightened; the mares that were in foal pressed uneasily against the “Old One” as she moved calmly up the hill.  And now she lay among them at the top of the hill and gazed at the faces of the old man and his wife. 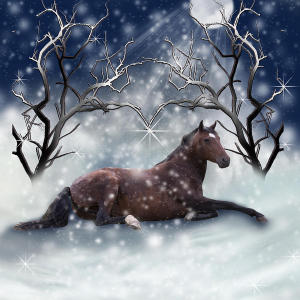 Those she loved she had not disappointed. Her body was brittle with years, tired from the climb, but her soft eyes were filled with devotion as she offered her gift~

Tears flowed as the old couple shouted their praise and joy, and again peace filled their hearts.

THIS IS A TRUE STORY. 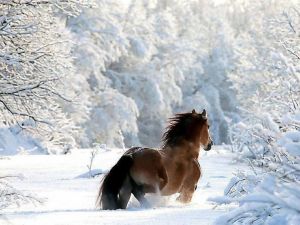 4 comments on “Because of Love”